Posted at 02:11h in Commentaries by admin 0 Comments
0 Likes

Copper prices just hit eight-month highs. Given the many headwinds for the global economy, my immediate reaction was cautious. The headlines about the cooling Chinese economy have been particularly strong arguments for caution. Copper and Chinese GDP growth have had a very strong correlation for decades. That’s why I tweeted that I want to see the Chinese and global economies heating up again before I get too excited about copper.

But then I remembered writing about copper decoupling from oil a while back. The copper market is changing, in part due to the red metal’s essential role in the new energy paradigm. I decided to check my premises to make sure I wasn’t missing an opportunity. I’m glad I did.

Forget about oil; the data show copper decoupling from China, and that’s huge. 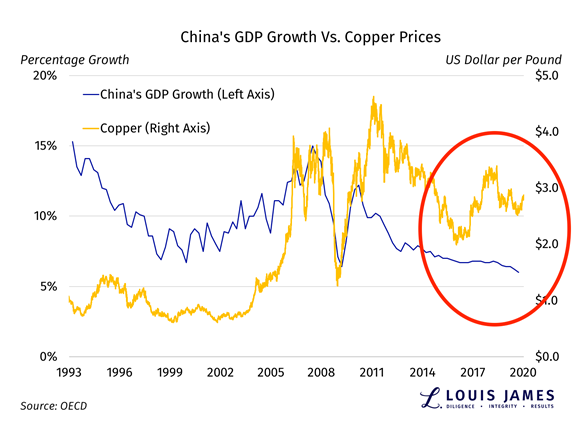 As you can see, it’s not just the last eight months we’re talking about. Copper started heading up from its most recent multi-year bottom in 2016, just before Chinese growth started slowing again. The previous decades of strongly positive correlation have turned into an almost inverse relationship since then. And yes, during the last eight months copper has surged even as Chinese growth has hit record lows.

In short, four years of data are telling me that I’m wrong to weigh China so strongly in my outlook for copper.

It may be that, as with gold, the Fed’s and other central banks’ easy-money policies are showing up as inflation of copper prices. That stands to reason, as the Fed’s dovish turn largely coincides with copper’s upturn, and copper is priced in USD.

It’s also true that some of the supply issues I’ve been citing for years are starting to bite. According to the latest stats from the International Copper Study Group (ICSG), world copper production declined 0.4% in the first nine months of 2019, and refined copper is in supply deficit. LME warehouse stocks of copper have fallen dramatically over the last six months.

This doesn’t mean that copper is immune to any major downturns in China or the world as a whole.

But as we’ve seen recently with palladium and rhodium, when push comes to shove, inelastic supply well below demand—even reduced demand—can send prices through the roof.

Fortunately, we don’t have to rush into anything. Copper demand becoming more global dovetails with the new energy paradigm. The easy-money and new Chinese stimulus stories aren’t likely to change anytime soon. So if supply remains as constrained as it seems likely to be (even with major new mines coming online), copper should rally for years to come.

That gives each of us time to gain the confidence we need to move into this space.

Personally, I’d still like to see a little more heat in the global economy before I start buying. But I’m glad I held on to two quality copper plays in The Independent Speculator portfolio.

And I’ll be researching new copper plays in the months ahead.